The Power Of The Pause

A good friend recently asked me why a pause is so important when speaking. His style is usually quite fast and dynamic, and he felt that leaving pauses might disrupt the flow and make his talk seem disjointed.

My first encounter with the power of the pause was when studying the plays of Harold Pinter at high school. Pinter was a master of the dramatic pause. A pause on stage is where the characters are not speaking, but they are perhaps doing something, and certainly thinking, and that adds to the drama. A pause adds importance to what precedes it and to what follows it.

I first realised the power of the pause in a presentation when I was at a private equity seminar in 2008. There were a number of presentations from private equity firms and professors, most of them with predictably ugly slides, and often they were just reading a written speech (most of which was written on the slides anyway).

But then came the closing keynote. It was by Didier Pineau-Valencienne, of whom I had never heard, but I later learned he is a famous French business leader, and honorary chairman of Schneider Electric.

He didn’t use slides. He didn’t read a speech. He looked at us. He made strong eye-contact. And he spoke slowly, carefully, deliberately, and powerfully. He left pauses regularly so we could reflect on what his words meant for us. Every sentence was well-crafted, yet simple rather than impressively complex. From the way he spoke, it was clear he was a leader. You could have heard a pin drop between his words.

You can think of a pause like a coffee-break. Coffee stimulates our attentiveness, and makes us more influenceable, and the break allows us to catch our breath between work periods. A pause can have a similar effect on you and your audience. Here are three reasons why you should speak slowly, carefully and powerfully, and leave pauses at appropriate times. 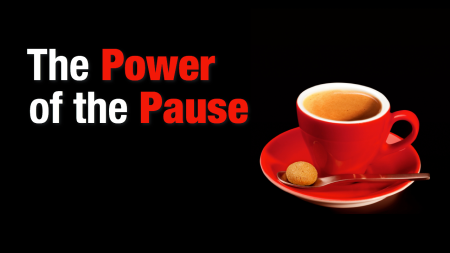 1. It gives the audience time to reflect.

This is the single biggest reason to pause from time to time. We don’t remember things because we hear them, or because we understand them. We remember them because they mean something to us, and because we remember how we feel about them. But for a message to have personal meaning and generate an emotion, we need not only to hear and understand it: we also need to think about it, to think about what it means for us, and to work out how it fits with the rest what we think we know about life, the universe and everything.

Personal reflection is the glue that makes a message stick. It is as powerful as any story.

The trouble is that most speeches and presentations bombard the audience with sentence after sentence, without giving them the time to perform this personal reflection. Leaving strategic pauses after important points gives the audience time to reflect, and gives your message a chance to stick.

2. It gives you time to reflect.

A pause between sentences is not only good for your audience: it is also good for you. It gives you a chance to catch your breath, to relax, and to prepare the next sentence. You are therefore physically ready to deliver the next sentence, and you know what you are going to say, so it will come out smoothly. It also gives you time to gauge the audience’s reaction to your talk.

Last week I gave a short talk to young students at a business school about slide design, and during one pause, I noticed the silence in the room. I have never known students to be so quiet (and no, they weren’t asleep). They were paying far more attention than most students in most classes. It was a good sign. The pause enabled me to notice it.

I’m not suggesting you should pause at the end of every sentence. Pause to give effect to your point, and that point may have required two or three sentences to make, so pause at the end to let people think, and you can take advantage of that time to catch your breath, check how your audience is reacting, and prepare your next point.

Always remember, by the way, that a pause will always seem far longer to the speaker than it does to the audience. So don’t worry if the pause seems long to you: your audience won’t think so.

Remember the four aims of presentation: to be heard, understood, respected and remembered.

If you rattle through everything at lightning speed as if you had a plane to catch or an urgent appointment with the nearest rest-room, your audience might not hear all your words, they might not properly understand, they won’t credit you with enough credibility to care what you are saying, and they won’t remember it anyway because they have no time to think about what it means to them.

Leaders, on the other hand, are confident. Leaders know that people will listen to them, and not interrupt them. Leaders are calm and collected. In short, leaders speak slowly and in a controlled way, and when they leave a pause, they are saying to the audience: “I am confident that nobody will use this pause to interrupt me.” And because they exude this confidence and this sense of leadership, generally nobody does.

Let’s finish with a few examples. Here are three fine speakers: Dr Martin Luther King Jr, Steve Jobs, and former French President Jaques Chirac. As you watch these (you probably only need the first minute of each to get the idea), try to imagine how those speakers would have appeared had they spoken extremely quickly. Would they have had the same effect?

In the first part of Dr King’s famous Lincoln Memorial speech, he spoke at approximately 92 words per minute. That is extremely slow compared to most speakers, and slower than I would recommend in most professional situations. But it worked for him. Could you imagine him speaking much faster? When your words have as much power as Dr King’s, don’t dilute that power by rushing through them.

Jobs was a master of the pause, and of speaking slowly. In the first 90 seconds of this example (the original iPhone introduction), Jobs spoke at 94 words per minute – and that’s not including the time he waited while the audience applauded.

Note how he even paused at the beginning. Of course it wasn’t the start of his complete presentation, but it was the start of this section. The long pause would have left the audience wondering what was to come, and it allowed Jobs to collect his thoughts, catch his breath, and prepare for perhaps his biggest ever launch. Again, his words all had such power which would have been lost if he had hurried through them.

Lastly, remember that slow should not mean boring and monotonous. Nobody would accuse Dr King or Steve Jobs of sounding boring. On the contrary, when you slow down and use pauses well, you can give your words far more power and emphasis. Watch how Jobs did this.

In this televised address to mark the end of his presidency, Jacques Chirac spoke purposefully and meaningfully. You may not speak French so this may not mean much to you, but just watch the first 30 seconds and listen to the sound of his voice. He spoke at 120 words per minute in this section, which is right in the range of 110-140 words per minute which I recommend to most speakers. It’s faster than both Jobs and Dr King, but still quite slow compared to most speakers who are above 150 words per minute (why not time yourself?).

(I can’t embed this one sadly since WordPress doesn’t seem to support embedding DailyMotion clips.)

So slow down, and leave pauses. You will have more credibility. Your messages will have a better chance of sticking. And your audience will certainly be grateful.

This entry was posted on Tuesday, April 3rd, 2012 at 11:53 am and is filed under Best Practices, General. You can follow any responses to this entry through the RSS 2.0 feed. You can leave a response, or trackback from your own site.

3 Responses to The Power Of The Pause